Perception of Insecurity in Bogota

Comments concerning the insecurity in Bogota recently raised its ugly ahead again. With several infamous incidents taking place in the capital over the last several weeks, including the shooting of a policeman in an affluent area last month (March) whilst stop checking two assailants, and the raid of a Starbucks Café in Usaquen last week, one of Bogota’s lower crime rate areas. According to the Camara de Comercio Bogota (Bogota Chamber of Commerce) perception of insecurity is now at its highest in the last 5 years (2015).

Also if we look at a couple of the more striking incidents over the past 12 months such as the shooting of a female for her bicycle in the Kennedy neighbourhood during a Sunday afternoon in May 2020, or the food delivery worker shot attacked and killed for his mobile phone whilst on duty in June 2020, or the waiter stabbed to death for his mobile phone in the Transmilenio public transport system ; if statistically the number of crimes have reduced, as stated by the Bogota Security Secretary, why is the general populations perception of insecurity increased?

According to statistics the rates of thefts & robberies in Bogota Metropolitan were reduced to 82.567 in 2020. 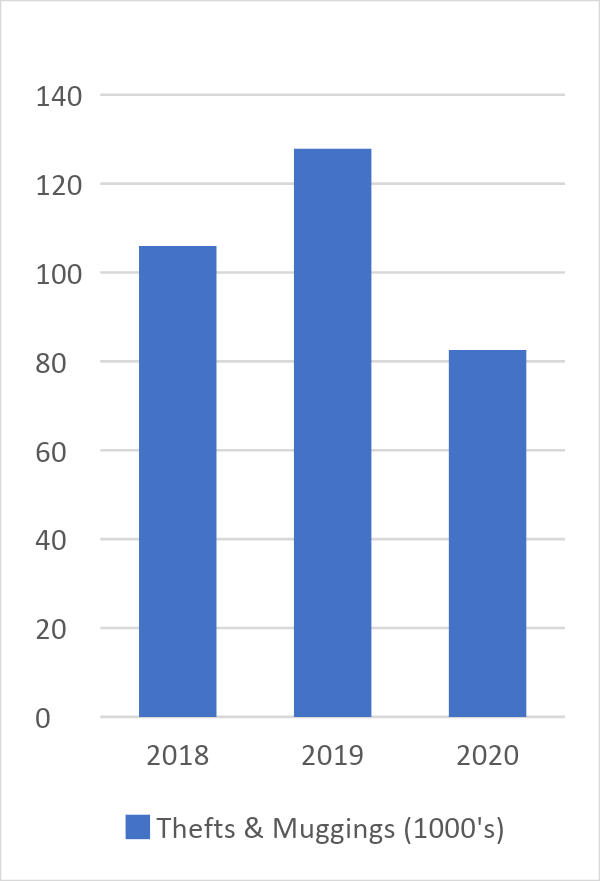 Bearing in mind for most of the year (2020) the Capitals residents were in confinement. Whether this was general quarantine; strict or flexible lockdown COVID-19 measures, with less people on the street, and with less victims for criminals to select, and also taking into consideration there are a large volume of cases that go unreported, has the reduction been significant enough to reflect the situation?

The survey carried out on 3,200 of Bogota’s citizens during the months of November & December 2020 by the Bogota Chamber of Commerce demonstrates findings that 76% of the surveyed feel unsafe in the Capital due to the insecurity. This percentage is 16% higher than the previous year (2019).

*The graph below shows the perception of insecurity amongst Bogota citizens. A survey conducted by Bogota Chamber Commerce over the last 5 years.

Why has perception of insecurity worsened? We believe that this is due to the crimes being more violent, shocking and the influence these crimes have on the local communities. Plus, the tendency of victims, their loved ones, people around them, and the wider community denouncing the criminal acts on social media. During the pandemic which has affected most people on an economic scale, a criminal forcing their possessions from them is just another blow to their financial situation.

But what is the perception of insecurity?

Perception of insecurity may be different from one person to the next and each and every one of us may manage these perceptions in different ways. As the Director of a Travel Security & Risk Services provider residing in Bogota, and with a Security & Risk Awareness background I would naturally have an eye for identifying developing situations & threats and manage these risks accordingly. As Security Professionals we tend to manage any risks & threats effortlessly as second nature.

After conversing with several Bogotano’s I found that their perception of insecurity for some has a severe impact on their daily lives and through fear are forced to make changes to accommodate the criminal landscape.

Perception of insecurity for some is the fear of leaving an establishment during dark hours, taking a taxi or driving their own vehicle during night time. For some, parents with children are even forced to collect their own through anxiety or feeling of having no control.

Perception of insecurity for some is the fear of meeting friends at a pub or restaurant that has easy accessibility from the street, worrying that criminal groups will violently charge through the door any moment demanding their possessions.

Perception of insecurity for others is the fear that every time you hear motorbikes passing from behind you anticipate two criminals on a motorbike jumping off and holding a firearm to you.

Perception of insecurity is the fear of taking your dog for a walk after 6pm, or leaving your cell phone at home (in fear of having it robbed) while you pop out for an errand hoping that you won’t receive an important phone call during your absence.

Perception of insecurity for others is feeling anxious whenever a taxi or transport collects you in a vehicle with non tinted windows, with the persistent beggars at the junctions tapping on the windows demanding money. Or even the motorcycle that pulls up beside you at the traffic lights wondering if they will tap on the passenger window with the firearm muzzle.

Perception for some is crossing the busy road through fear of the two hooded men walking towards you.

Black Mountain Solutions (BMS) Security Services Colombia can help your organization & staff understand the Risks & Threats that they may face whilst on business travel in Bogota & other areas in Colombia.